On March 28th 2013, after several months of development we launched Shopster, our groceries list app. On this post I’d like to cover what we did in anticipation to the launch, how it correlated to sales, and a glimpse n our future plans. I think it paints a good picture of the state of the iOS AppStore in 2013. 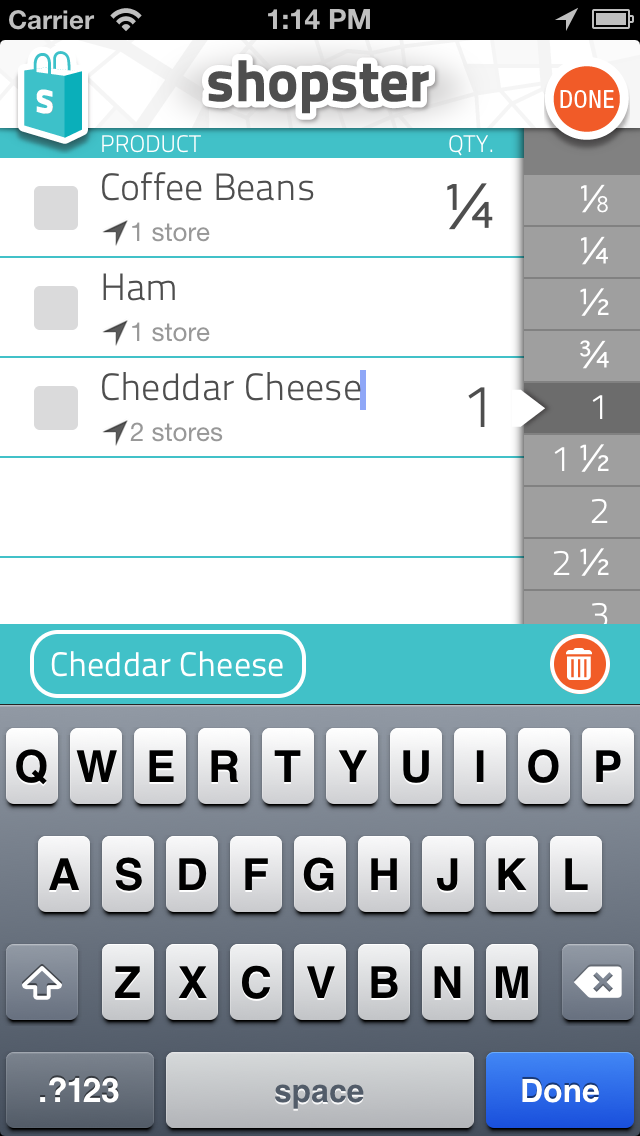 In case you don’t know it, here’s what Shopster looks like. It’s a simple groceries list app with a twist: it automatically learns the location where you check an item as purchased, so it can later use that information to trigger a location geo-fenced reminder.

We submitted the app to Apple with time to spare, and set a release date well in advance. This gives you time to pitch your app to tech writers for reviews while having promo codes available, as well as some cushion time should you need to submit an urgent fix (we did, and it was great to see it approved before launch).

We started pitching well known blogs based on our preferences and by checking their reviews of competing apps. For each blog we tried to find -when possible- the specific person to write to, instead of just sending a generic email.

We also booked an ad with The Syndicate for the week after our launch. We see this ad as kind of a meta ad: their network covers sites that are followed not only by our target audience, which is very broad, but also by lots of other bloggers who review apps. My thinking here was that it could help us boost awareness of the app and have more reviews.

The launch date arrived, and the app showed up in the App Stores. It was a national holiday Argentina, so I was out of the office playing with my kids, while frantically checking email and reloading RSS feeds and Twitter looking for mentions of our app.
On launch date the app was mentioned or reviewed by The Loop, GigaOm and TUAW. Our road to fame and money had begun, or so we thought until the next morning.

I can’t say the first day sales were a disappointment, as I was not sure what to expect, since our previous apps did not have the coverage Shopster had. We were surprised to see the app had only sold about 200 units. Here’s a graphic of our sales (in units) throughout the first week in the AppStore: 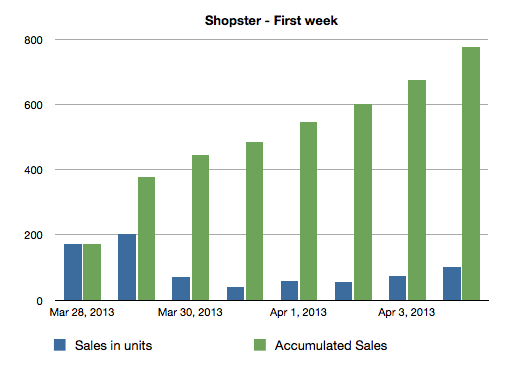 What’s interesting to me here is to see how these sales correlate with the AppStore rankings. Rankings are believed to be the best available marketing tool, as they give your app great visibility, but the calculations Apple use to generate those are unknown.

As you can see, in our first week averaging 100 sales a day, our app ranked consistently in the top 100 productivity apps.

As you can see, Shopster only ranked as high as 75th and remained in the Top 300 (contrast that with being in the Top 100 for Top Paid).

Dring the first month of life of the app, we continued too gain awareness of the app. Shopster got reviewed by Gizmodo and finally, on April 11th, it was picked by Apple as New and Noteworthy. At the point we thought sales would skyrocket. Our app even got mentioned by AppStore’s Twitter account:

Here’s a summary of the sales during the first four weeks: 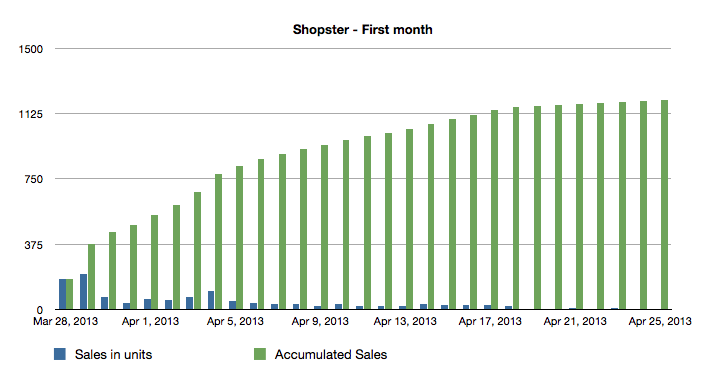 As you can see, things did not get better, and our app averaged 41 sales per day.

It’s still hard for me to understand what makes an app a hit and what makes it fail, so I’ll share my current hypothesis of some things that may have happened with Shopster:

I’d like to close this post with our view for both the future of Shopster and the AppStore business.

For Shopster we are working on a major update that will bring the highly requested feature of sharing lists. We have some great ideas on how we can make that experience unique to the user, and think we can get a “second round” of awareness of our App and convince more users to try it.

We’ll also probably try a higher price, as our sharing features will bring some fixed monthly costs we need to cover for.

We are not ready to give up on Shopster, so at the very least we want to give it a second chance.

As for the future of Quadion in the AppStore, we’ll try to make more sustainable businesses. We now think apps need to be able to offer some subscription based pro features, so your best customers can commit to annual or monthly payments that help pay the bills. I think the best model is what Instapaper or Pinboard offer, where they have an upfront payment that gives you most of the basic features, and a sustainable subscription model with more advanced features.